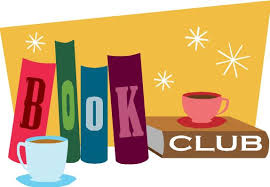 Meets on the 3rd Tuesday of the month at 6:30pm (unless otherwise noted). Does not meet in July & August. Check out next month’s title on our event calendar! New members are always welcome.

2019-2020
June – The Library Book by Susan Orlean
May – The Girl Who Smiled Beads: A Story of War and What Comes After by Clemantine Wamariya and Elizabeth Weil
April – Woolly: The True Story of the Quest to Revive One of History’s Most Iconic Extinct Creatures by Ben Mezrich
March – Meet Me in Atlantis: My Quest to Find the 2,500-Year-Old Sunken City by Mark Adams
February – Hedy’s Folly: The Life and Breakthrough Inventions of Hedy Lamarr, the Most Beautiful Woman in the World by Richard Rhodes
January – The Woman Who Smashed Codes: A True Story of Love, Spies, and the Unlikely Heroine who Outwitted America’s Enemies by Jason Fagone
December – The Stranger in the Woods: The Extraordinary Story of the Last True Hermit by Michael Finkel
November – Inheritance by Dani Shapiro
October – Lafayette in the Somewhat United States by Sarah Vowell
September – Dead Wake: The Last Crossing of the Lusitania by Erik Larson

2018-2019
June – The Feather Thief: Beauty, Obsession, and the Natural Heist of the Century by Kirk Wallace Johnson
May – Prairie Fires: The American Dreams of Laura Ingalls Wilder  by Caroline Fraser
April – Disappointment River: Finding and Losing the Northwest Passage by Brian Castner
March – One Book One Community Mansfield 2019 – Freedom by Any Means: Con Games, Voodoo Schemes, True Love and Lawsuits on the Underground Railroad by Betty DeRamus
February – Educated: A Memoir by Tara Westover
January – The Bright Hour: A Memoir of Life and Dying by Nina Riggs
December – One Writer’s Beginnings by Eudora Welty
November – Bowling Alone: The Collapse and Revival of American Community by Robert Putnam
October – Endurance: A Year in Space, a Lifetime of Discovery by Scott Kelly
September – Mrs. Sherlock Holmes: The True Story of New York City’s Greatest Female Detective and the 1917 Missing Girl Case That Captivated a Nation by Brad Ricca

March – The Professor and the Madman: A Tale of Murder, Insanity, and the Making of the Oxford English Dictionary by Simon Winchester
February – Have Mother, Will Travel: A Mother and Daughter Discover Themselves, Each Other, and the World by Claire & Mia Fontaine
January – Following Atticus: 48 High Peaks, One Little Dog, and an Extraordinary Friendship by Tom Ryan
December – American Passage: The History of Ellis Island by Vincent Cannato
November – Call the Midwife: A Memoir of Birth, Joy, and Hard Times by Jennifer Worth
October – Have a Little Faith by Mitch Albom
September – Animal, Vegetable, Miracle: A Year of Food by Barbara Kingsolver